When it comes to effortless charisma and wry wit, it’s hard to top Canadian charmer Ryan Reynolds. But even though the Vancouver-born actor is mostly unchallenged in those categories, it took a while for him to take off as a bonafide movie star. Reynolds’ most notable early role was as a co-lead on ABC’s ’90s sitcom Two Guys and a Girl (which garnered him ample Jim Carrey comparisons), but his transition to the big screen wasn’t an instant home run.

After a decade of hit-or-miss comedies, Reynolds tried his hand at the superhero game. After 2011’s Green Lantern fizzled, he’d eventually hit the bullseye with 2016’s Deadpool (which was actually his second time playing the “Merc with a Mouth” after X-Men Origins: Wolverine), marking the perfect use of Reynolds’ naughty humor and comic delivery.

Where to Watch: Cinemax, Cinemax Go, or rentable on most platforms.

One of Ryan Reynolds’ most interesting projects from the last decade was 2014’s The Voices, in which he played a factory worker with mental health issues, Jerry, who imagines his pets (also voiced by Reynolds) are talking to him. Normally, movies featuring talking animals are family fare but in this black comedy big swing, Jerry’s detachment from reality leads to multiple murders. Reynolds excelled as the lead here, helping elevate this very dark, bizarre tale. Gemma Arterton and Anna Kendrick co-star.

Where to Watch: Hulu, or rentable on most platforms.

In a rom-com that plays slightly like CBS’ How I Met Your Mother, Ryan Reynolds portrays a father who recounts the stories of his past romantic relationships to his ten-year-old daughter (Abigail Breslin), including how he ended up marrying her mother, to help explain his impending divorce. Also starring Isla Fisher, Rachel Weisz, and Elizabeth Banks, this film is a refreshing, clever dramedy about finding love.

Where to Watch: HBO, HBO Max, Cinemax, Cinemax Go, or rentable on most platforms.

Written and directed by Superbad’s Greg Mottola and loosely based on the theme park in upstate New York, Adventureland is a comedy about summertime park workers in 1987. Reynolds is in a supporting role here, as the Fun Zone’s older maintenance man, but it’s still a great use of him in an ensemble (while also winking at previous “big fish in a small pond” roles he’d played in Waiting and Van Wilder). Jesse Eisenberg and Kristen Stewart star, along with Reynolds, Kristen Wiig, Bill Hader, and Martin Starr.

Where to Watch: Rentable on most platforms.

From Step Up and 27 Dresses’ Anne Fletcher, 2009’s The Proposal was like a charisma explosion. Reynolds and Sandra Bullock starred in this rom-com hit about a female executive who wrangles her assistant into acting like her fiancé so she’s not deported to Canada. Reynolds’ and Bullocks’ chemistry was off-the-charts here, both with impeccable comedic timing and the extraordinary ability to play off one another. Also starring Malin Åkerman, Craig T. Nelson, Mary Steenburgen, and Betty White.

Where to Watch: HBO Max, or rentable on most platforms.

Claustrophobic thriller Buried, from 2010, was another risky departure for Reynolds. It paid off though, working with very little to unleash a ton of tension. As an American truck driver in Iraq, kidnapped and buried alive in a coffin with only a lighter, flask, flashlight, knife, glow-sticks, pen, pencil, and a mobile phone. Reynolds delivered a frantic, nerve-wracking performance as a man desperate to survive this real-time crucible.

Where to Watch: FX Now, or rentable on most platforms.

Though Deadpool 2 wasn’t the lightning-in-a-bottle delight that the first film was, it was still a ferociously funny outing, at many times crasser and gorier than the original movie. Short-ish on plot, Deadpool 2 featured Reynolds’ sassy superhero reeling from a tragedy and trying to rebuild his life with a surrogate family of supers – namely Josh Brolin’s future warrior Cable, Zazie Beetz’s “luck isn’t a superpower” Domino, and Julian Dennison’s pyrokinetic Russell (whom Deadpool is intent on saving from a heel turn).

Where to Watch: Disney+, HBO Max, HBO, or rentable on most platforms.

For Free Guy, which emerged after several pandemic delays to a healthy box office haul, Ryan Reynolds delivered a riotously fun performance in an eye-popping, imaginative environment as an NPC in a GTA-style MMO who gains sentience and falls for a real world player character. With a catchy concept and sweet, self-aware humor, Free Guy proved that Reynolds could deliver a big hit with an original character. Jodie Comer, Lil Rel Howery, Utkarsh Ambudkar, Joe Keery, and Taika Waititi also star.

Where to Watch: Sling, TNT app, or rentable on most platforms.

Ryan Reynolds lent his warm whimsey to the world of Pokemon, voicing Detective Pikachu in 2019 adventure-mystery Pokemon Detective Pikachu. Co-starring Justice Smith, Kathryn Newton, Ken Watanabe, and Bill Nighy, Detective Pikachu was a rare delight within the realm of video game movies, thanks largely to Reynolds’ appeal (and facial-motion capture) as the coffee-obsessed sleuth, in an endearingly comedic performance that’s closer to his subversive Deadpool schtick than you’d expect from a Pokemon movie.

Where to Watch: Netflix

Stranger Things and Free Guy director Shawn Levy landed a slick, futuristic family romp that captured the spirit of ‘80s sci-fi with Netflix’s The Adam Project. Reynolds plays a pilot from a dystopian future who travels back in time to uncover the truth behind his wife’s disappearance, only to wind up in the wrong year where he meets his younger 12-year-old self (Walker Scobell). A thoughtful mash-up of films like Back to the Future, The Last Starfighter, and more, The Adam Project also stars Mark Ruffalo, Jennifer Garner, and Zoe Saldaña. For more like this, take a look at our guide to the best sci-fi movies on Netflix.

Where to Watch: Fubo, Hoopla, Showtime, Showtime apps/add-ons, or rentable on most platforms.

One of the smaller films on this list, Mississippi Grind, from (eventual) Captain Marvel directors Anna Boden and Ryan Fleck, features Reynolds and co-star Ben Mendelsohn in a drama about a gambling addict on a road trip to a high-stakes poker game in New Orleans who’s convinced that his newfound friend (Reynolds) is a good-luck charm. Together, Reynolds and Mendelsohn create a tragicomedy character study for the ages.

Where to Watch: Fubo, FX Now, or rentable on most platforms.

Ryan Reynolds finally found the role he was born to play. Fans were woefully teased with the Reynolds/Deadpool casting back in 2009’s X-Men Origins: Wolverine where Reynolds first played mercenary Wade Wilson (who was robbed of his ability to speak and snark in the third act). Tim Miller’s Deadpool, however, got everything right and all at once the perfection of this actor/IP paring was made evident. Deadpool was a comedy-action triumph, filled with awesome one-liners, stylish action, and heaps of fun fan service.

Looking for more top movies? Take a look at our guide to the best-reviewed movies of 2022 for the latest and greatest films.

Wed Jun 15 , 2022
TEMPE, AZ (3Television set/CBS 5) – The Arizona Coyotes need to have a new household, and the crew hopes to develop it in Tempe. Group executives issued a proposal to the Tempe City Council Thursday for a $2.1 billion condition-of-the-artwork arena and leisure district. It would be positioned along Tempe […] 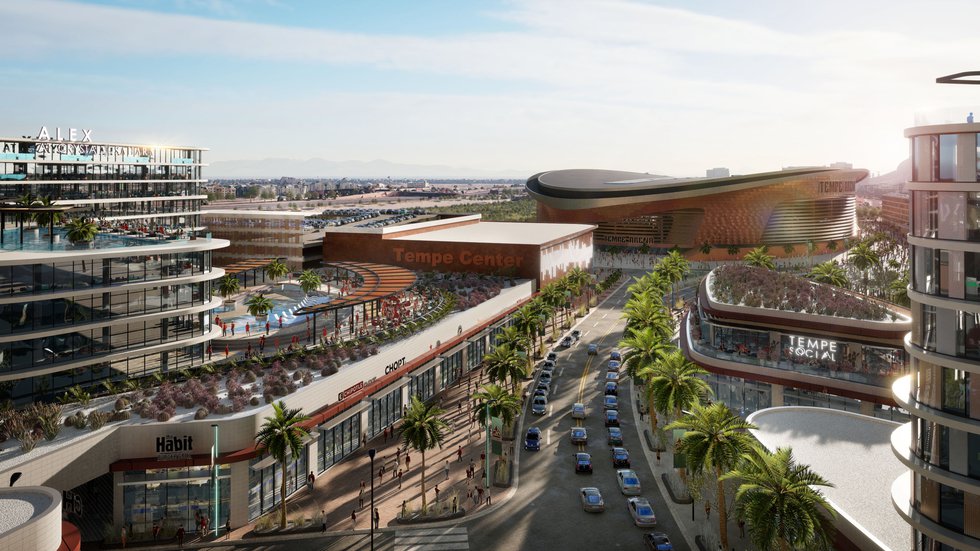