The Glasgow designer, architect and artist led a collaborative group dubbed “The Four” as Britain’s answer to Art Nouveau. Their ground-breaking vision melded the handmade, streamlined aesthetic of the Arts and Crafts movement with a celebration of the natural world from the 1890s to the 1920s.

Open at the Albuquerque Museum, “Designing the New: Charles Rennie Mackintosh and the Glasgow Style” brings that rich vocabulary of forms to an exhibition of 166 works of art. The show encompasses furniture, tiles, glass, ceramics, posters, needlework, panels, books and illustrations characterized by taut lines, stylized forms, sleek curves and geometries created by the designer and his colleagues. The first of its kind to travel to the U.S. in a generation, the exhibit also celebrates the 150th anniversary of Mackintosh’s birth.

The Glasgow version of Art Nouveau rooted itself in the past through folk legends and beliefs, Albuquerque Museum director Andrew Connors said.

Mackintosh took his inspiration from his Scottish upbringing, blending it with the flourish of Art Nouveau and the simplicity of Japanese forms.

He constructed his iconic, tall-backed chair from ebonized wood and modern upholstery. Before Mackintosh, furniture makers created massive, overstuffed chairs. The British saw furniture as ornament displaying the wealth of its owner.

“Previously, a tall chair would have been oppressive, but this one is light, soaring and celebratory,” Connors said.

“He strips the chair almost down to pure function. It winds up not looking cold and off-putting. It still maintains a human sense of scale.

“They are not pure black,” he added, “They are hand-rubbed stain on wood.”

Those chairs framed the tables of the Ingram Street Tea Rooms in Glasgow. Mackintosh’s wife Margaret Macdonald designed a commissioned sculpted panel of the May Queen for the same space, using gesso, twine, glass beads, thread and mother-of-pearl. The artist himself designed a facing panel.

“Tea rooms were great opportunities for Mackintosh to work with his own aesthetic,” Connors said. “When you see it in person, you realize all these lines are made of rope dipped in plaster. Up close, it’s very crude.”

A poster for the Glasgow Institute of Fine Arts by James Herbert MacNair, Frances Macdonald and Margaret Macdonald Mackintosh shows twin classical Greek god-like figures rising from the text. They read as both asymmetrical and stripped-down.

“They’re reducing the detail with solid fields of color,” Connors said, “with a slight asymmetry influenced by Japanese prints.”

Glasgow was the industrial heartland of 19th century Scotland. The Glasgow School of Art embraced this distinctive variant of Art Nouveau, centered around its Technical Art Studios. Both the Arts and Crafts and Art Nouveau movements were in part reactions against industrialization and the machine-made.

“They felt technology was going to turn human beings into automatons,” Connors said.

Mackintosh “really was rooted in the Arts and Crafts movement from Great Britain,” he continued, “focusing on the handmade and reducing excess ornamentation.”

The American Federation of Arts and the Glasgow Museums co-organized the exhibition with curator Alison Brown. 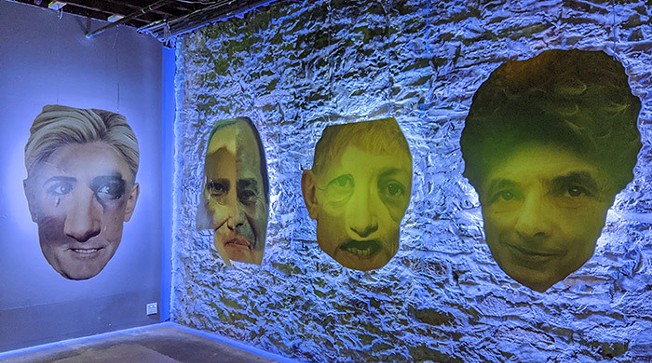